How to use transitional words effectively 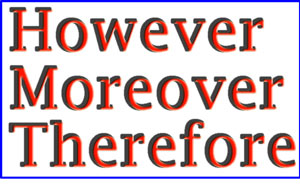 There are many different transitional words and phrases, and they should be used for different purposes. The key is to understand the logical connection between the phrases or sentences that these words link. "Transition" means "change" and there are many kinds of changes that can happen in an essay.

The first sense of change is to continue the present thought in a new sentence. We call these "additive" transitions. Additive transitions introduce an idea or example, continue a thought, show similarity, or provide reference or clarification. The following words are used as additive transition words:

The fourth class of transition words are those that relate to cause and effect. These are called causal transitions. (Please watch out for the common transposition of letters that changes causal into casual; your spellchecker might even make the change for you.) I often see errors here when I edit student essays. You need to be very careful with your logic when using these transitions. Nonetheless, they are very important in laying out the logic for your essay. Notice that there are five different causal conditions: Cause, Condition, Effect/Result, Purpose, and Consequence.

1. When an assertion is followed by its reason


The list of words for this blog post have been partially sourced from  https://www.msu.edu/~jdowell/135/transw.html, which is licensed for re-use through Creative Commons license 3.0 <http://creativecommons.org/licenses/by/3.0/>.
Posted by Peter J. Francis at 13:36