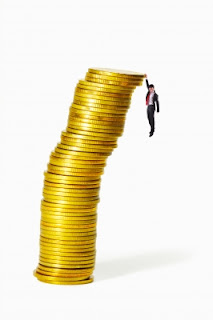 The on-going scandal in predatory student loans has now led the University of Phoenix to suffer a 54% decline in enrolment and a plunge in the stock price of its parent company. This is a positive sign for students and long overdue.

Nonetheless, the University of Phoenix is clearly admitting students that are not successful. That's not unusual. All universities have graduation rates less than 100%. Most notice a big dropout rate after the first semester. University is harder than high school, and students who are away from home for the first time, struggling to maintain passing grades and unsure of their motivation often leave to get a new perspective on what they want to do in life.

But the success rate for the University of Phoenix is only 4%! That means that 96% of students who enrol in undergraduate courses do not graduate with diplomas. Essentially, they have paid money for courses that will do little to help them move forward in their careers. And much of that money is borrowed. That's the problem.

I think they are admitting students that are not prepared for the academic work that they are going to face.

Students know that higher qualifications will help them get better paying jobs. They know that investing in themselves is a good strategy. But they often don't have a clear idea of their skills and abilities. The schools advertise about opportunities. They even might truthfully advertise that 90% of graduates are earning some nice salary. But they don't say that 96% of students will walk away with nothing but debt.

There are two parts to the university. The recruiting and enrolment office are sales people. Their job is to sell you on the program. The teachers are an entirely different thing. They are skilled  educators who want to do a good job. That's not to say that there's no connection between the two.

A friend of mine was teaching at the University of Phoenix in a classroom program. He is a highly ethical teacher, and dedicated to his students. I met him as an undergraduate many years ago, and we became and remained friends. He told me he was pressured by the administration to give better grades, but he insisted that he would not lower his standards. His contract was not renewed. He now has a PhD and teaches at a public university.

In the United States, the quality of the university is an important component of the value of a degree. Some of the top universities in the country, such as Harvard, are private universities. But many public universities offer high quality education programs. There's no doubt that students can greatly advance their life prospects through public education. President Obama made this easier by his proposal to make community college free. Community colleges, leading to state colleges and degree programs are a great way for public education to be extended to all worthy students.

The key is "worthy students." When colleges admit students that are not qualified, the chances of successful outcomes are low. Some students are able to pull up their socks, utilize academic assistance services, and develop good academic skills. Others cheat their way through, using paper writing mills, and other nefarious means to pass. Many use private tutoring and editing services, such as mine, and I'm happy to assist student who what to learn to write better. I can see improvements over time with many of my long-term clients.

But I also see students who fail to grasp the some of the fundamental concepts in academic writing. Some, even at the graduate level, do not understand the basics of APA or MLA style. Some do not understand the difference between research and plagiarism. I believe universities who admit these students are failing in the screening process. But private universities have an incentive to admit, not to screen. Their bottom line is profit.

The worst offenders are private universities at the bottom of the tier. They get less publicity than the University of Phoenix because they are small. But the costs for students is no less dire. One client, studying healthcare management sent me an essay to edit. I happened to look up the name of the professor. It turned out the professor was trained in restaurant management, not healthcare management. And it wasn't easy to find the professor, because when I Googled his name, most of the hits that came up were people re-selling essays that had been written for the course in the past. So what quality of scholarship is coming out of that course? Do you want your grandmother cared for in a facility run by one of these healthcare management grads?

I encourage students to seek higher education, no matter what your skill level; however, be prepared to work hard to improve your skills. Do your homework on the school before you take on student debt. And, as always: buyer beware!

Image courtesy of pakorn at FreeDigitalPhotos.net
Posted by Peter J. Francis at 10:13