Don't put a quote in your essay! 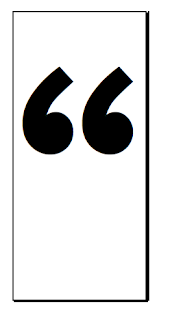 Many of the essays that I edit use quotations from sources. That's fine. But don't call it a quote. It's a statement if you need to name it at all. (Usually, you don't.)

The Merriam-Webster dictionary provides three definitions for quote. All are verbs. To quote is an action. You are actively encouraged to quote, but don't call it a quote. It's a quotation.

I'm not writing this to be pedantic about the difference between a noun (quotation) and a verb (quote.) The point is that you don't need to name your citation as a quotation.

A quotation is what you call the words of another that you put in your essay and surround with quotation marks. It's merely a statement. (And even that is too wordy.)

Here's what I typically see in a first-year essay:


Neither of these should use the word "quoted" or "quotation."

Instead of "quoted," you can simply say "said." Or use the old standby, "according to" followed by the name then a comma and then the quotation itself.

Here's the worst way to quote in an essay:
If you are worried about your word count, then this could be the way to go, but for whatever marks you save by being long enough, you will lose marks for poor writing. We already know it was a research study, that's why it has been published. Naming anything and then using "it" can't be good. How about the following?
We've turned 17 words into 9. That's almost a 50% savings. And who wouldn't like 50% off? I'm sure the person who marks your essay would really enjoy this.


When do you say quotation?

In the rare cases when you would use the word quotation, it would be if you need to be explicit about someone using someone else's words.